Lady Grace Hay Drummond-Hay was closely associated with zeppelin travel aboard the Graf Zeppelin and Hindenburg. Born Grace Marguerite Lethbridge, she was the widow of a British diplomat, Sir Robert Hay Drummond-Hay.

As a journalist for the Hearst press organization, Drummond-Hay made her first zeppelin flight in October, 1928, when she was chosen to accompany five other reporters — including her companion and Hearst colleague Karl von Wiegand — on the first transatlantic flight of the Graf Zeppelin from Germany to America.  As the only woman on the flight, Drummond-Hay received a great deal of attention in the world’s press. In March of 1929, Lady Drummond Hay and von Wiegand were once again aboard Graf Zeppelin, for the ship’s “Orient Flight” to Palestine.

Later in 1929 the Hearst organization co-sponsored Graf Zeppelin’s historic Round-the-World flight and their reporter Lady Drummond-Hay was once again a passenger.  She was the only woman among the 60 male passengers and crew, which again included her companion von Wiegand.  Drummond-Hay’s presence on the flight, and her reporting as the ship circled the globe, garnered tremendous attention in the press. 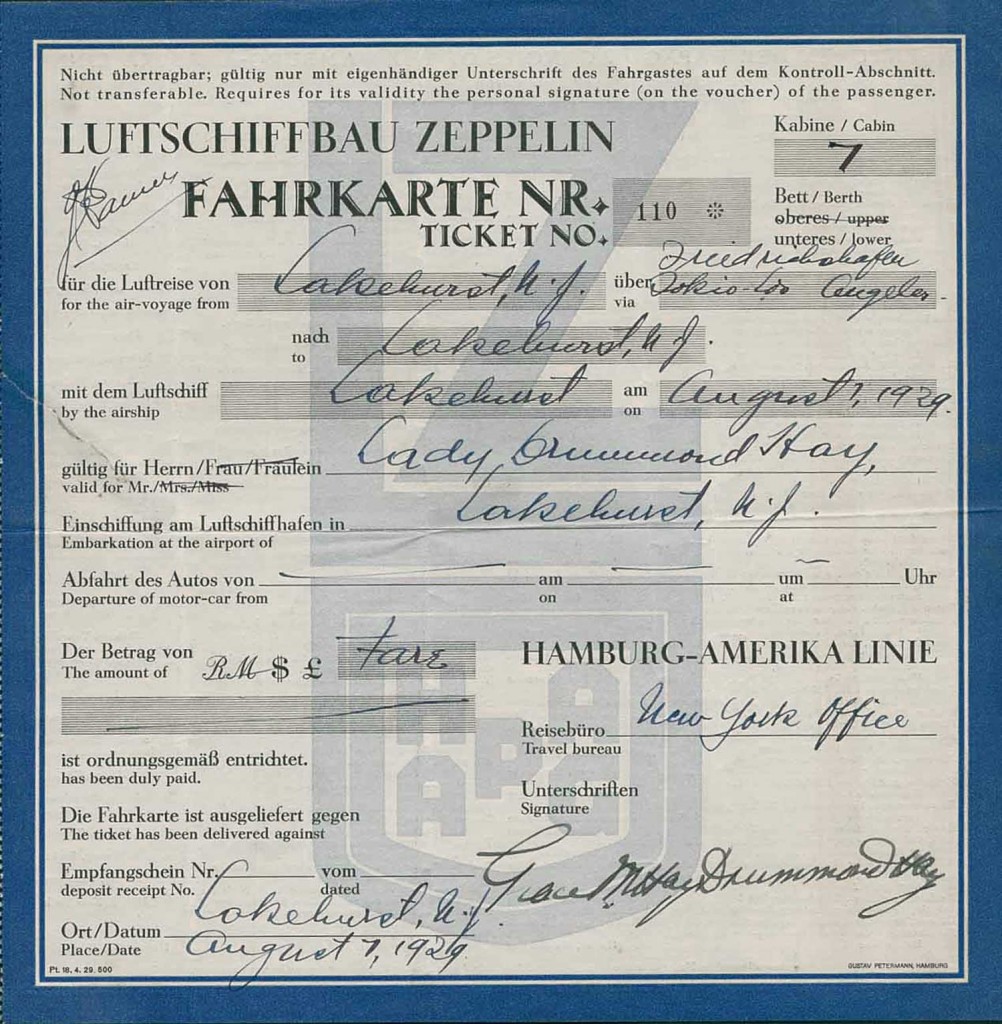 Lady Drummond Hay’s experience on the Graf Zeppelin’s Round-the-World flight, and her romance with fellow journalist Karl von Wiegand, is the subject of the film Farewell by Dutch filmmaker Ditteke Mensink. Several elements of the film are fictional, as discussed in more detail on the blog.

Lady Drummond-Hay was also onboard the Hindenburg’s maiden flight from Germany to the United States in May, 1936, along with aviation enthusiast Clara Adams.

During the flight, Lady Drummond-Hay wrote and posted a letter to her friend Adams, looking forward to meeting again “as companions in adventure when the next Zeppelin is completed.”

The letter is dated is dated May 8, 1936; the age of the passenger zeppelin ended just a year later, with the Hindenburg disaster of May 6, 1937. I cannot tell you how happy I was to find you on board the Hindenburg as one of the passengers on her first flight from Germany to America. I hope we will meet again as “companions in adventure” when the next Zeppelin is completed, and that once more we will pioneer a path through the air together. Lady Drummond-Hay and her partner Karl von Wiegand were in the Philippines when the Japanese invaded the islands in 1942, and both were interned in a Japanese camp.  Although Drummond-Hay survived the war and returned to New York, she died of coronary thrombosis in early 1946 as a result of the extremely harsh conditions she had suffered at the hands of the Japanese.

Such a fascinating character.

Shame she died so Early…

what is the importance of Lady Drummond Hay flying around the world??

How much did the ticket cost? 1929 trip around world?

How can I see this documentary in full?

I have some letters and signed books from Lady Hay Dummond Hay she wrotes to my grandfather. If anyone is interested in copies?
Greetings from Germany

Hi, my name is Avaline Wilson, age 10. I am doing a school project on Lady Grace and I was wondering if I could get a signed copy of one of your letters you have?

Thank you so much

And this, this is why I love the internet 🙂

I’d be interested in procuring copies of Lady Drummond-Hay’s letters to your grandfather. Would you have a PDF version of this? Otherwise, I’d be pleased to pay for postage.

Are the letters written in German?

I am highly interested in copies of these letters and what books Lady Drummond-Hay signed. Do you think it is possible to acquire a pdf or copies? (Greetings from Germany).

Hello, I would be very greateful to recieve any letter or related documents of hers. I am collecting and conserving documents, photos, and films from 19th and 20th century of my family’s lives. My immidiate family and me have been digitalizing as many items as possible because many of our… Read more »

Congratulations to everyone that contributed to this fascinating film. Most engaging and beautifully edited and produced. Keep up the great work.