Airships have often served as the symbol of a brighter tomorrow.

Even before the first zeppelin was invented, airships featured prominently in utopian visions of the future. This 1898 poster advertised a musical comedy on the New York stage: And these German and French postcards predicted air travel in the year 2000: Mixing the Airship and the Airplane: The View from the 1930’s


Futurists of the early 20th Century often combined lighter-than-air and heavier-than-air technology, as in this urban skyscraper airport and solar-powered aerial landing field: 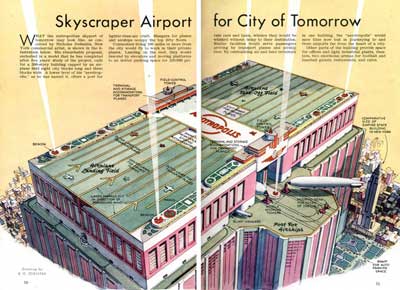 This hybrid airship concept from 1943, designed to meet the needs of war, predicted the hybrid airships that would be built in the 21st century. Goodyear and the Future of Zeppelin Travel

Sometimes futurist airship visions were promoted by companies which were actually involved in the lighter-than-air business.

For example, the Goodyear-Zeppelin company, which built the American airships Akron and Macon, and which had a financial interest in the promotion of the passenger dirigible, frequently offered alluring illustrations of future airship travel.

Goodyear president Paul Litchfield and publicist Hugh Allen included the following pictures in their 1945 book, WHY? Why has America no Rigid Airships?: These drawings from Hugh Allen’s The Story of the Airship (1931) imagined an Art Deco dining salon, promenade, and even a lounge with a fireplace. Airships could even advance medical technology, such as this airship tuberculosis hospital. The Airship and the Soviet Future

Under the illusion that communism was the way of the future, Soviet propagandists loved images of modernity and enlisted the airship in their cause. Soviet poster, 1931. (“We Are Building a Fleet of Airships in the Name of Lenin.” Azeri text)

Sometimes illustrators got so carried away depicting lavish interiors that they neglected to leave room for much lifting gas, as in this illustration from The American Magazine.

The article described future airships to be built by the Goodyear-Zeppelin Company, which would be “fitted up as sumptuously as a Palm Beach winter hotel”: This illustration of an atomic dirigible from a Soviet magazine in the 1960’s left no room for lifting gas at all: […] The Airship and Futurism: Utopian Visions of the Airship […]

This is wonderful stuff! Iâ€™ve always liked airships. I even flew on one of the Good Year blimps as a kid! (No joke! I really did!) Some of these designs are impossibly fanciful, but still fun to think about. The giant airship has a lot of baggage in the collective… Read more »

I just came across this:

Another dream. Hope it will fly.

I remember that the Zeppelin Museum edited a catalog a decade ago or so for an exhibit on airships that never flew. This is a nice complement to some of what they covered!

Hi, I’m doing a paper for school on zeppelins and airships in pop culture. Could I possibly have the links to your sources for some of these?

I believe Dan (The writer/creator of this site) studied Airships himself, so this isn’t really a website for information organized from the internet, more like a Airship Encyclopedia.

It does say on his twitter page that he is an airship historian.

The information on this site is based mostly on primary research so the website, itself, is the source. Most of the images are scanned from my personal collection of research material, supplemented with images I have obtained from various archives or museums around the world.

Is the “inventor” of the corrugated iron airship the same Tsiolkovsky who was the Russian rocket pioneer? It wouldn’t be the first time someone was totally FOS in one area but was quite smart and productive in another!

I have a large ( more than 4 foot) metal ” model of the Akron Airdock. It has a motor that opens the end doors and the front of an airship comes out and then goes back in and the doors close. I’m not sure if this was a display… Read more »

I am looking for information about a Goodyear Zeppelin trophy that I found at an auction of an old gas station..History of transportation is shown from right to left, Mercury[?] standing to left, topped with dimensional Zeppelin…Was there an actual race, or is this some kind of tire dealer sales… Read more »

Anybody have anything on vacuum airships? They can’t be built today because any vacuum chamber strong enough to resist the outside air pressure is too heavy to fly. Only with some ultra-light, ultra-strong material could the vacuum airship be built. There are a few in science fiction, but real life… Read more »

Using a vacuum is a nice idea but nothing more. Yes a vacuum is not infammable but it is still dangerous. The pressure difference between outside and inside the hull is what is dangerous. Any leakage will lead to implosion with extremely dangerous shrapnell effects (because the hull material pushed… Read more »