Who doesn’t love the Goodyear Blimp?

The Goodyear Blimp may be the best known and most loved airship in history. As I said in an interview with CNN, “You can imagine football without the Goodyear Blimp, but it would be kind of sad. It has become part of our national consciousness.”

Goodyear has been using blimps for advertising since 1925, when it launched the first Goodyear Blimp, Pilgrim, and over the past 90 years dozens of blimps of various types have served as “Goodyear Blimps.”

This is a comprehensive guide to Goodyear’s advertising blimps from 1925 to the present.

The New Goodyear Airship: It’s Not a Blimp At All!

In 2011 Goodyear announced that it would replace its fleet of blimps with semi-rigid Zeppelin NT airships. For the first time in its long history, the “Goodyear Blimp” will not technically be a blimp at all.

Introduced in 2014, the Zeppelin NT is larger, faster, and more maneuverable than the venerable GZ-20A it will replace. 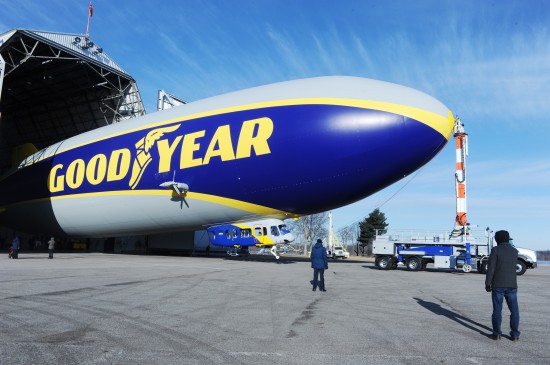 The new Goodyear airship leaving the hangar for its first flight on March 17, 2014. (photo: Goodyear)

How is Goodyear’s new airship different from a blimp?

Unlike a blimp, which has no internal structure and maintains its shape from the pressure of the gas inside its envelope, the Zeppelin NT is built around a framework of high-strength, lightweight carbon-fiber and aluminum, and all the ship’s major components — cabin, engines, and tail assembly — are mounted on the rigid structure.

The new Goodyear zeppelin is considerably larger than the blimps it replaced in both length and volume.

At 246′ in length, Goodyear’s new Zeppelin is considerably larger than the 192′ blimps it will replace. (image: Goodyear)

The new zeppelin is also significantly faster than the blimps; the new Goodyear airship has a maximum operating speed of 73 mph, compared with the 50 mph for the blimps, allowing the zeppelin to cover more ground and participate in more events. Wingfoot One over Goodyear’s Wingfoot Lake Airship Base where it was assembled. (photo: Goodyear) 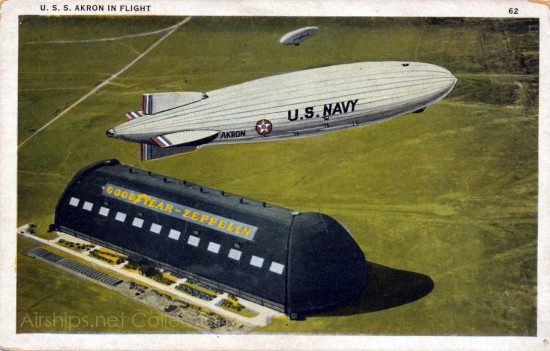 The Goodyear and Zeppelin companies have a long history of working together. In September, 1923, the two companies formed the Goodyear-Zeppelin Corporation as a joint-venture and the two firms worked closely throughout the 1920s and 1930s, building the airships Akron and Macon for the United States Navy in the early 1930s.

A Guide to Goodyear’s Advertising Blimps: 1925 to the Present The first Goodyear blimp used for advertising was Pilgrim, which was also the first blimp to fly with safe helium rather than flammable hydrogen.

Pilgrim (I) was christened by Florence Litchfield, wife of Goodyear executive and lighter-than-air advocate Paul Litchfield. Originally inflated with hydrogen when it first flew at Akron, Ohio, on June 3, 1925, Pilgrim was re-inflated with helium the next month; every Goodyear blimp since then has used helium.

Pilgrim was also the first blimp to have its control car entirely supported by an internal catenary curtain and cables, and flush with the envelope. Previous blimp cars were suspended beneath the envelope to keep the engine away from the flammable hydrogen, attached by cables secured to finger patches or looped around the envelope. The category system employed by Pilgrim became the standard for all future blimps. Goodyear president Paul Litchfield named the blimps after defenders of the America’s Cup yacht race, because he thought blimps could “serve a similar purpose for persons living inland as do yachts for those living along the seacoast.”

Mayflower was christened with a flask of liquefied air on May 21, 1929 by Bertl Arnstein, wife of Dr. Karl Arnstein, the famed airship engineer who was later noted for designing the Goodyear-Zeppelin airships U.S.S. Akron and U.S.S. Macon for the United States Navy. Vigilant was christened on June 25, 1929 by Miss Edith Litchfield, daughter of Paul Litchfield. 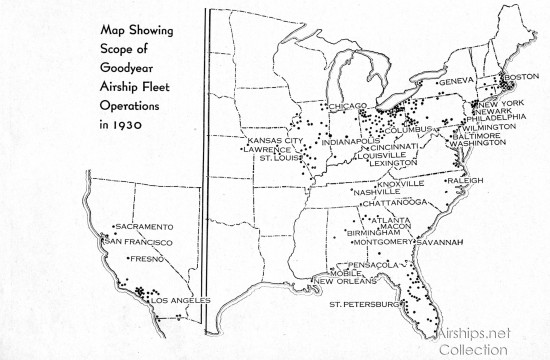 Goodyear Airship Operations, 1930. From The Story of the Airship, Hugh Allen, 1931. (Airships.net collection)

During this era Goodyear built the only blimp it ever made for another private firm. Neponset was built for the New England Airship Corporation of New Bedford, Massachusetts and carried advertising for that firm’s clients, including Bird & Son and the Enna Jettick Shoe Company.

Mayflower (II) (NC-10A)
First flight: May 17, 1929
Mayflower was destroyed in a storm on July 12, 1931 when it crashed into power lines at the Kansas City Municipal airport and burned. Reliance at 1933 Century of Progress Exhibition in Chicago Type PA – “Flagship of the Fleet”

Defender was christened by Amelia Earhart on August 30, 1929 at the National Air Races in Cleveland.

Defender was sold to the U.S. Navy and flown to Lakehurst October 5, 1935. As U.S. Navy blimp G-1, the ship collided with Navy blimp L-2 (formerly Goodyear’s Ranger) on June 8, 1942 during night operations near Manasquan Inlet, New Jersey. Both blimps were destroyed. Blimps of the Pre-War Era

In the mid-1930s Goodyear upgraded Puritan, Reliance, and Resolute with 123,000 cu. ft. envelopes that would become the prototype for the U.S. Navy’s L-Class, and built new blimps (Enterprise, Rainbow, and Ranger) of that size as well.

The car used on Enterprise is now in Smithsonian’s National Air and Space Museum. Car C-49 had a long history; it served Goodyear in peace and the U.S. Navy in war, and it was rebuilt in 1969 and put into service as GZ-20A Columbia (N4A) in 1975. Goodyear did not operate advertising blimps during World War II.  At beginning of the war the the U.S. Navy took over Goodyear’s five advertising blimps (Resolute, Enterprise, Reliance, Rainbow, and Ranger) and operated them as Navy blimps L-4 through L-8. Ranger was temporarily renamed Century in 1951-1952 when operated by Goodyear under contract to advertise Stag beer. Enterprise was temporarily renamed Century in 1952 when operated by Goodyear under contract to advertise Stag beer.

The car of this blimp is on display at the New England Air Museum at Bradley International Airport in Windsor Locks, Connecticut. The car used on Columbia was first used on Enterprise of 1934 and is now in Smithsonian’s National Air and Space Museum. Spirit of Goodyear was christened by astronaut Sally Ride on March 15, 2000,

Columbia (VIII) was re-named and re-registered in 1992 as:

Eagle was re-named and re-registered in 2002 as:

The ship was re-christened Spirit of America on September 5, 2002, by Mrs. Letitia Driscoll, the mother of New York police officer Stephen Driscoll, who was killed in South Tower of the World Trade Center on September 11, 2001.

Goodyear operated one Type GZ-22 blimp, built by Loral, from 1987-1999. Named Spirit of Akron, the GZ-22 was the only Goodyear blimp ever powered by jet engines, and was distinctive for the X-configuration of its tail assembly. With the enduring popularity of the Goodyear Blimp, and the company’s recent commitment to the Zeppelin NT airship program, we can expect the joy of seeing a Goodyear airship in the skies for many years to come. A Note on using this Guide:

What defines a particular blimp? Is it the car? The envelope? The name? The registration number?

Blimps with the same car, name, or registration number often had different envelopes at varying points in their careers, and cars were often rebuilt and used on different types of blimp.

Since this guide is intended to give the reader a sense of which blimps were flying at a particular time in history, and to allow the reader to identify blimps seen in photographs and referred to in historical documents, ships are identified by name and registration number. Where a ship with the same name is visually different — for example, because of a significantly larger envelope — a separate entry has been provided.

The text on this page and this compilation of information is copyright and may not be copied, reproduced, or used elsewhere in any form without written permission.

Several years ago, my husband created 3 “blimp like “ clocks. They are very whimsical and very special. I was hoping to include a photo, but don’t see a prompt for that. We would like to donate all 3 for a blimp display. Please respond, if interested

I’m not sure. You would have to check with Goodyear.

I have the 1968 Flxible bus used as a blimp tender for the “Columbia” blimp. It is all original, including the seats, and the six extra plates bolted to the roof to attach the guy wires to hold the blimp.It was later sold to a church in Canton, Ohio.I am… Read more »

As a long time resident of Akron, I lived aprox. 3 miles from the airdock and about 5 miles from Wingfoot Lake. For one of Goodyear’s anniversary I got to go inside the Airdock.

I remember the summer of 1976, was six years old at the time, I was in the car with my parents and sister. My dad noticed the Goodyear blimp and said,”look it’s the Goodyear blimp, it’s hear in LittleRock!” He followed it to what at the time was called Adams… Read more »

I had the distinct privilege of going up in a Goodyear Blimp on June 4, 1972 while it was on display at Washington Dulles International Airport. It was a Sunday afternoon. I have misplaced my certificate, but I do remember the pilot’s name was Patrick Henry. Can anyone advise as… Read more »

The San Francisco Chronicle did a story on the famous “Ghost Blimp” that crashed in Daly City during WWII, and at the end of the article said, “L-8 was repaired and after the war returned to Goodyear, which renamed it “America” and sent it to sporting events around the country… Read more »

The control car is at the Naval Aviation Museum in Pensacola , Fla., and is restored to Navy configuration from 1942. See historynet.com story Mystery of the Ghost Blimp.

Figures. Leave it to the Chronicle to get it wrong.

The car of the L8 was indeed refurbished and used for the Goodyear “America” later on.
The newspaper made it sound as if the entire blimp (car & envelope) were handed to Goodyear and flew again shortly thereafter.

As a pilot for the Louisiana State Police I was approached by the ground crew of the America to help them s with speeding tickets they got trying to beat the blimp to Baton Rouge , no problem, as a reward they gave my flight crew and there families a… Read more »

When in the Navy in 1956, I was stationed at Lakehurst New Jersey. Assigned to the ZP-3, I drove a mechanical ground handler to land and dock the airships.

I remember seeing the Goodyear Blimp fly directly over my house as a kid in the early 1980’s in Kansas. One of those vivid memories from youth that I will never forget.