The first Goodyear blimp used for advertising was Pilgrim, which was also the first blimp to fly with safe helium rather than flammable hydrogen. 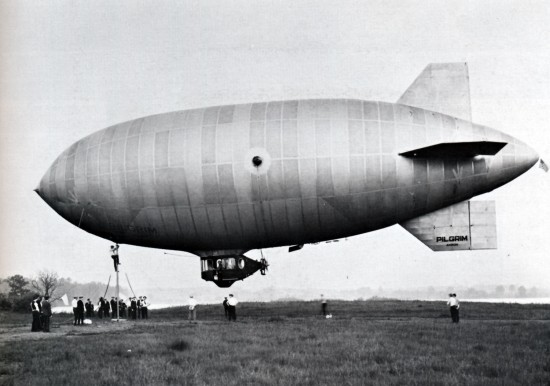 The unnamed ship made its first flight on June 3, 1925, inflated with hydrogen. On July 17, 1925, it took to the air with helium, and on July 18, 1925, the blimp was christened Pilgrim by Florence Litchfield, wife of Goodyear executive and lighter-than-air advocate Paul Litchfield. Pilgrim as illustrated by Flight magazine; May 6, 1926

The blimp was originally fitted with a 47,700 cu. ft. envelope (D-94) and was not registered with the Department of Commerce, and therefore had no registration number. Pilgrim’s car is now on display at the Udvar-Hazy Center of the National Air and Space Museum (photo: Dan Grossman, Airships.net)

Pilgrim’s car was built of a magnesium-coated steel-tube framework covered with thin metal sheeting. The car was small but luxuriously appointed with mahogany veneer blue mohair velour upholstery, and had seats for one pilot and two passengers, with a small cockpit at the rear for a mechanic to tend the engine. Yachts in the Sky

Pilgrim was the first of Goodyear’s planned “Air Yachts.” Goodyear executive Paul Litchfield believed blimps could “serve a similar purpose for persons living inland as do yachts for those living along the seacoast” as he explained in the Goodyear book The Story of the Airship (Hugh Allen, 1931).

Flight magazine referred to Pilgrim as “A New American Sporting Dirigible” and noted:

“It is claimed that there is a great future for this type of and its mooring masts should be found at country clubs, private estates, etc., while the holding of airship regattas””in the same way that motor boat and yachting clubs now have similar events””can also be held with success. Personally, we think this small “blimp” type of airship possesses great possibilities from the sporting point of view, as is the case with ballooning””although, of course, ” blimping ” conies out a trifle more expensive.

Pilgrim introduced a number of important innovations. Perhaps most importantly, Pilgrim was the first blimp to fly with safe helium rather than flammable hydrogen. Originally inflated with hydrogen when it first flew at Akron, Ohio, on June 3, 1925, Pilgrim was re-inflated with helium the next month and made its first flight with helium on July 17, 1925. Every Goodyear blimp since Pilgrim has used helium.

Pilgrim was also the first blimp to have its control car entirely supported by an internal catenary curtain and cables, and flush with the envelope. Previous blimp cars were suspended beneath the envelope to keep the engine away from the flammable hydrogen, attached by cables secured to finger patches or looped around the envelope. The catenary system employed by Pilgrim became the standard for all future blimps. Interior of a later blimp, showing the catenary curtain.

Originally fitted with a bumper bag, Pilgrim’s car was later modified with the addition of a taxi wheel, which was employed on her fleet-mates as well. Pilgrim was also equipped with a portable mooring mast to allow it to land in any flat level field of sufficient size. Pilgrim was unusual in having a small rigid keel (a 21 ft. long triangular magnesium section that was laced on the inside of the envelope after the ship is inflated), a feature that was not repeated on future blimps. Pilgrim I Specifications as reported by Flight magazine; May 6, 1926