Graf Zeppelin’s 1931 Arctic Flight was both a scientific expedition and a dramatic display of the airship’s ability under extreme conditions.

In July, 1931, the ship carried a team of scientists from Germany, the United States, the Soviet Union, and Sweden on an exploration of the Arctic, making meteorological observations, measuring variations in the earth’s magnetic field in the latitudes near the North Pole, and making a photographic survey of unmapped regions using a panoramic camera that automatically took several pictures per minute.  The size, payload, and stability of the zeppelin allowed heavy scientific instruments to be carried and used with an accuracy that would not have been possible with the airplanes of the day.

The five-stage flight covered 13,310 kilometers in 136:26 flying hours between July 24 – July 31, 1931, and literally changed the map of the Arctic region with the information obtained during the flight. 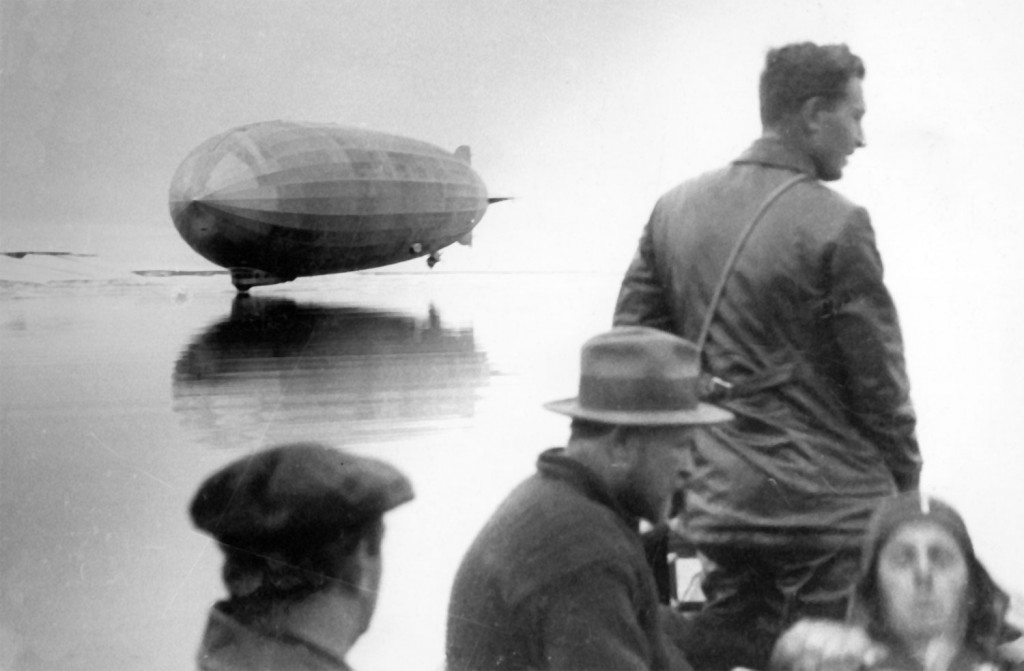 Airships and the North Pole

Polar explorers had been interested in airships from the earliest days of lighter-than-air flight, and American airship pioneer Walter Wellman flew a dirigible inside the Arctic Circle as early as 1907.  Wellman made two more attempts to explore the Arctic by airship in 1909 and 1910. Walter Wellman’s airship in the Arctic, 1907

On May 12, 1926 the airship Norge (video), designed and commanded by Umberto Nobile, became the first aircraft to reach the North Pole, on an expedition organized by Norwegian Roald Amundsen and American Lincoln Ellsworth. Nobile returned to the Arctic in 1928 in his semi-rigid airship Italia, which crashed on May 25, 1928, killing almost half the crew and leaving the survivors stranded on the ice for more than six weeks before they were rescued. Even before Graf Zeppelin was constructed, polar explorers had expressed interest in using a zeppelin to fly over the Arctic.  The International Association for Exploring the Arctic by Means of Airships, or Aeroarctic, led by Norwegian explorer Fridtjof Nansen and Walther Bruns, began advocating the use of a zeppelin for polar exploration in the early 1920’s, and the successful transatlantic delivery flight of LZ-126 in 1924 added momentum to their interest.

Hugo Eckener himself discussed the possibility of Arctic exploration during the Zeppelin-Eckener-Spende lectures he gave around Germany to raise money for the construction of LZ-127, and the prospect of polar exploration was a factor in the decision of the German government to support the construction of LZ-127.  When Fridtjof Nansen died suddenly of a heart attack in 1930, Eckener was elected president of Aeroarctic and plans for LZ-127’s participation in the Arctic expedition were solidified.

The original plan envisioned a rendezvous between LZ-127 and a submarine expedition led by explorer Sir Hubert Wilkins (who had been a passenger on Graf Zeppelin’s 1929 Round-the-World flight), to be financed by the Hearst press organization.  Wilkins obtained a surplus submarine from U.S. Navy,  which he renamed Nautilus, but mechanical difficulties prevented the vessel from participating in the expedition.

Mapping was done by means of two cameras, including a 9-lens panoramic camera, invented and operated by Professor Aschenbrenner of Munich, which automatically took nine photographs every few seconds and recorded the time and altitude of each panorama.

Meteorological observations were made by Professors Pavel Molchanov and Ludwig Weickmann, and included high-altitude observations taken with radiosondes (“Molchanov balloons”) released in three locations: East of Franz-Josef Land, over Severnaya Zemlya, and near Vaigach Island. Radiosonde being launched from LZ-127

Magnetic field measurements were taken every four hours with a “double compass” loaned by the Carnegie Institution’s Department of Terrestrial Magnetism, under the direction of Dr. Gustaf S. Ljungdahl of the Swedish Hydrographic Office, assisted by Lincoln Ellsworth and Lt. Cdr. Edward H. Smith of the United States Coast Guard.

Personnel of the Flight

The flight was under the command of Hugo Eckener and included a reduced complement of zeppelin crewmembers to accomodate the heavy scientific equipment and many scientists participating in the expedition. Preparations for the Expedition

LZ-127 required several modifications in preparation for the challenging Arctic flight; metal in portions of the gondola were removed to eliminate interference with observations of the earth’s magnetic field, and the passenger cabins were stripped to create space and remove weight to accommodate the scientific instruments needed for the expedition.  The partitions between cabins were removed and replaced by curtains, and even the china, crockery, and glassware was removed and replaced by paper cups and plates to eliminate the weight of water which would have been required for washing.

Provisions for the Arctic Flight

The ship was also loaded with 11,200 lb of survival gear and rations, including hunting and fishing gear, sleeping bags, 23 sledges, cooking stoves, and 12 tents; the organizers of the expedition were very aware of the situation faced by the survivors of the Italia crash and other polar expeditions which experienced unexpected difficulties.

The journey began on Friday, July 24, 1931, with an 8 hour-7 minute flight from Friedrichshafen to Berlin-Staaken airfield.

LZ-127 departed Berlin-Staaken in the early hours of July 25, and passed over Sweden, Estonia, and Finland before landing that evening in Leningrad, where the ship met by an enthusiastic crowd of 100,000 people. The ship passed over Lakes Ladoga and Onega, and the forests and tundra of northern Russia, before reaching the port of Archangel at the mouth of the Dvina River.  At around 7:00 PM in the evening the ship crossed the Arctic Circle, flying over the White Sea between the peninsulas of Kola and Kanin.

In the late afternoon of July 27, 1931, LZ-127 reached Hooker Island in Franz-Josef Land and landed on the water to exchange sacks of mail with the Soviet icebreaker Malygin, which was on a tourist cruise to the Arctic.  As with other Graf Zeppelin flights, the polar expedition was largely financed with revenue from stamp collectors.  Graf Zeppelin transferred about 650 pounds of mail to the Malygin, and picked up about 270 pounds of mail from the Soviet ship in return; about 50,000 pieces of philatelic mail (see example) in total were carried on the flight.

Also on board Malygin was Umberto Nobile, who was in the boat which rowed to Graf Zeppelin’s gondola; Nobile shook hands with fellow explorer Lincoln Ellsworth, whose colleague Roald Amundsen had died in the attempt to rescue Nobile and his crew from the wreck of the Italia five years earlier. Hooker Island was used at the starting point for the ship’s panoramic mapping cameras, which needed to be calibrated with a known location, and after departing the Malygin LZ-127 began its mission to map Franz-Josef Land and other areas of the Arctic.  The scientists aboard Graf Zeppelin soon began to correct inaccuracies on existing charts; two islands which were recorded on maps of Franz-Josef Land (Albert Edward and Harmsworth Islands) were found not to exist, and what was thought to be an island (Armitage Island) was actually a peninsula of Prince George Island.

At about midnight the ship reached the nothernmost point of the flight, Prince Rudolf Island, about 490 nautical miles from the North Pole. The next morning LZ-127 reached the poorly-charted region of Severnaya Zemlya (“North Land,” which was known as Nicholas II Land before the Russian Revolution), and discovered for the first time that it is actually two islands divided by a channel.  The ship continued to the Taimyr Peninsula, and then to the small settlement at Dickson Island, at the mouth of the Yenisey River, where LZ-127 dropped a gift of food, mail, and newspapers by parachute.

The next day, July 29, was spent mapping the islands of Novaya Zemlya (“New Land”), and then LZ-127 began its return to Germany, passing over Leningrad at approximately 3:00 in the morning of July 30, and landing at Berlin-Tempelhof in the evening.

LZ-127 made a short, two-hour celebratory stop in Berlin before returning to its base in Friedrichshafen, where the ship arrived early in the morning of July 31, 1931.

Film of the Arctic Flight

Graf Zeppelin’s expedition to the Arctic was documented on film, and highlights of the flight can be seen in this footage:

Correction: the Norge was not an airship, strictly speaking. She was semi-rigid, like the Italia. I did enjoy reading this page a great deal. Thank you! (edit after further research. It seems non-rigid or semi-rigid dirigibles are also called airships. I always thought: Airship=rigid and Dirigible=semi-rigid or non-rigid lighter than… Read more »

WOW! Such an interesting and informative read about the polar flight! Amazing images too!